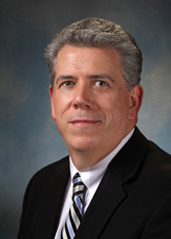 Ken King was named Salem District Engineer in February 2015 to lead the transportation program for a 12-county region of southwest Virginia that includes more than 9,200 miles of roadway. He also serves as executive level manager for more than 900 VDOT employees.

Ken has more than 20 years of experience in the transportation field. He served nearly nine years as VDOT’s regional operations director for the Bristol, Salem and Lynchburg districts. In this role, he  oversaw the construction of a new Transportation Operations Center and the establishment of a statewide Customer Service Center.