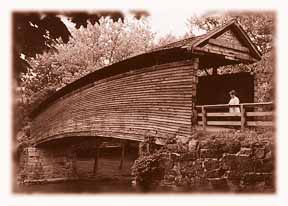 In memory or imagination, covered bridges conjure up sights and sounds of days gone by. In Virginia, they began to dot the countryside nearly two centuries ago. Spanning rivers and streams, their number grew to the hundreds.

Eventually they gave way to their vulnerability to flood and fire, and to the technology that replaced the wooden peg with the metal bolt and the broadtimbers with narrow steel. By 1900, the overhead steel truss bridge had become the engineers' design of choice.

Relatively few covered bridges survived into the early years of the 20th century. Most of them reflected the evolution in design of three pioneers in the annals of bridge construction:

Today in Virginia, only seven covered bridges still stand. Four have been preserved as landmarks and three are on private property. You are invited to visit these picturesque structures that span time as well as water.

Three bridges are on private property: