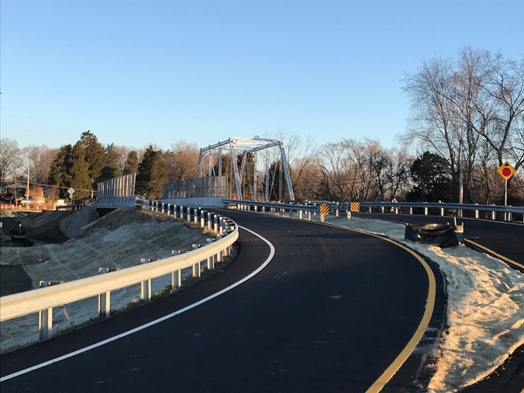 NOKESVILLE – The historic wrought-iron truss bridge and the recently constructed one-lane bridge carrying Aden Road (Route 646) over the Norfolk Southern Railroad have reopened to traffic, according to the Virginia Department of Transportation.

The old truss bridge was rehabilitated and reinstalled to improve safety for drivers, to bring the bridge up to current design standards and to extend the overall life of the bridge. It is now in place to accommodate northbound traffic, alongside the newly constructed span open to accommodate southbound vehicles, enabling two-way traffic over the railroad for the first time.

Built in 1882 for the Keystone Bridge Company, the truss bridge was purchased in the early 1900s and moved to Aden Road by Norfolk Southern, who transferred ownership to VDOT in 2014. The old truss structure showed substantial structural deficiencies, so a revised design was developed with the Virginia Department of Historic Resources and the community to allow the truss bridge to be rehabilitated as well as remain on the National Register of Historic Places.

Some final detail work on the $8 million project will occur into the spring without major traffic impacts. The project is financed with federal, state and Prince William County funding. Norfolk Southern donated a construction easement to allow the work to be completed.

Aden Road averages 3,500 vehicles a day at the railroad crossing.

Information in VDOT news releases was accurate at the time the release was published. For the most current information about projects or programs, please visit the project or program Web pages. You may find those by searching by keyword in the search Virginia DOT box above.