Some stretches of highway are more challenging to drive than others. Roadway, traffic, weather, inattention and distractions all come into play for drivers.

Fatalities on Virginia’s roadways have increased from a low of 700 in 2014 to 968 in 2021, a 38 percent increase. On our interstates, fatalities have increase over 50 percent during the same period. Even with decreased travel during the pandemic, police have recorded more speeding and distracted driving on crash reports.

Beginning with the interstate system of highways, Virginia is divided into three highway safety corridor regions:

Designated segments of interstates in each region have been identified as having higher-than-expected crash rates and crash severity, including injuries and fatalities. The three agencies combined crash data with public comment to determine the location of the initial three Highway Safety Corridors.

Where are the Highway Safety Corridors?

Interstate 81, Montgomery and Roanoke counties
The first Highway Safety Corridor is a 15-mile section of I-81 between mile marker 127, near Ironto in Montgomery County, and mile marker 142, near Salem. Speeding and heavy truck traffic have contributed to this area's designation.

Interstate 95, Northern Virginia
The second corridor covers 11 miles of I-95 in Northern Virginia, from Route 619 at Triangle to Route 123 at the Occoquan River. Aggressive and inattentive drivers with many congested period have made this road worthy of being named a corridor.

Interstate 95, Richmond
The third corridor is a 13-mile stretch of I-95 that extends from Bells Road in the southern part of Richmond to Parham Road north of the city. This area became a corridor after posting a crash rate more than twice the state average.

Click an image below to view a larger PDF version of the map for each corridor:

Slow down - phone down- buckel up!

To initiate the program, 1100 miles of interstate freeways were assessed for several safety (crash-related) measures within each of the three regions. Based on the crash data analysis, the following criteria were used:

The following additional criteria were suggested at public meetings held during the fall of 2003:

To comply with the statute, the following criteria are used to identify a candidate Highway Safety Corridor on interstate highways:

The following rules shall be observed concerning public hearings prior to the selection of Highway Safety Corridor:

Highway safety corridor signs are posted at the beginning of a designated zone and after every interchange entry to indicate that increased moving violations fines apply when driving in a designated highway segment.

Criteria for designating corridors are actually measures of safety. Within each region, the crash severity weighted frequency and crash rate criteria were overlaid where they exceeded the established thresholds.

Crashes within the designated interstate corridors have been tracked by the severity of the outcomes. The charts below provide the number and percent of Fatal and Injury (F+I) crashes and the property Damage Only (PDO) crashes within each corridor. The after period has been split into two periods: the first and last five years after the HSC designation. Note: the crash reductions in 2020-21 were primarily due to reduced travel during the pandemic. 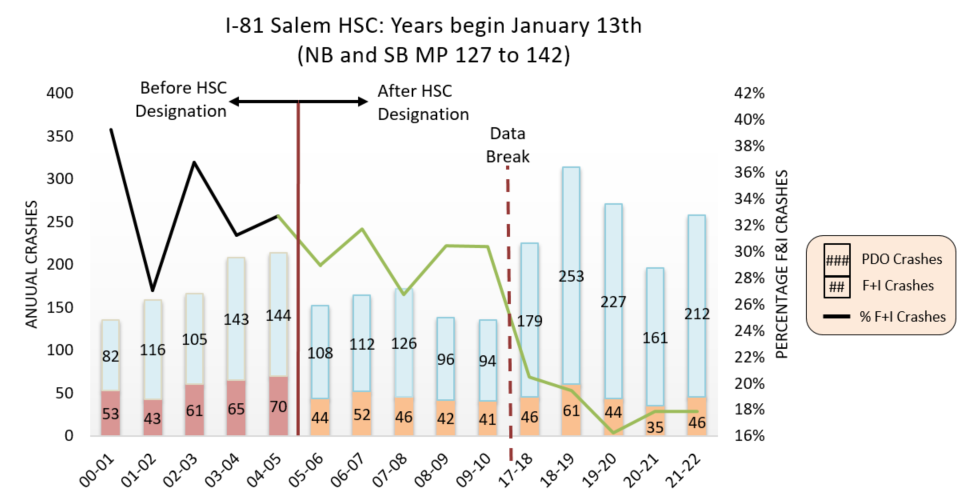